I am here in Chicago for the business school international accreditation meeting (acronym ICAN for those with enough time to look it up — too bad for you). Over 1,400 of my closest friends have descended upon the Windy City to talk business school talk and act important.

I have flown in and out of Midway airport since the mid 1950s when I lived in Kankakee, Illinois, later in Champaign,Illinois. Midway airport was built in 1923 and by 1931 it was the busiest airport in the world. Surprised? It was a hoppin’ place in the 1950s! I saw my cousin Phyllis puke on one flight, enjoyed a trip to the cockpit on a second, experienced a lighting strike on a third, and had an engine failure on a fourth. It is cool to be old and remembering all of this stuff. Midway and LaGuardia traded back and forth for the busiest airport title during the 1930s and 1940s, but from 1948 until 1961 Midway was tops. Traffic peaked first in 1959 with about 10 million passengers, although in 2012 there were 19 million passengers. Then O’Hare was built in 1961 followed by DFW and Hartsfield and it has been downhill since then. Today, Midway is the 30th busiest airport in the US. Enough history. Ask me about reversing the flow of the Chicago river later.

I cannot seem to get the thoughts about acceptable aircraft carry-on items out of my mind (see my previous post), especially given the new rules about knives. Yes, for those of you who have thought about this, it is now acceptable to carry on a knife that is less than 2.36 inches long and less than 0.5 inches wide. I have no idea where these dimensions originated. Moreover, laptops do not have to be placed in a separate bin if they are stored in acceptable cases, and I can now carry on ski poles, hockey and lacrosse sticks and pool cues. It is still no to meat cleavers, spear guns, salsa, snow globes, axes, hatchets, cattle prods, stun guns, tear gas and dynamite. Why must the TSA list these items?

I did walk to Millennium Park as soon as I arrived on Sunday. My goal was to see the new exhibition of Jun Kaneko’s tanukis. See the artwork attached to this post. The exhibition commences April 12, but the pieces were installed last week. I sneaked around the fenced-in areas, (no, I was not arrested on a “B and E” charge), and I took some photos. They are “way cool,” as some of our students would say. We are very lucky to have Jun and Ree in Omaha, and two of Jun’s pieces in Mammel Hall.

BTW, the Cubs lost their home opener today. So sad. 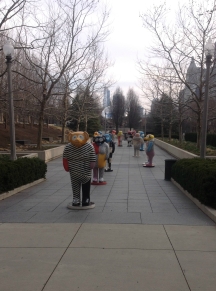