Just a few days ago, John Grisham, Morgan Freeman, Arching Manning and other notable Mississippians called for the removal of the confederate emblem from Mississippi’s state flag. This story is the latest on a series of reports about and if and how the confederate flag is, and will be, displayed. The fate of confederate monuments is being debated as well. Presidential candidate and Louisiana governor Bobby Jindal has referred to a non-existing state statute that he is using for direction as he addresses the politically-charged issues of what to do with the monuments. It is in the context that our summer vacation unfolded.

While many of our friends and acquaintances question our judgement in driving the 1,600 or so miles between Omaha and Clearwater Beach, Janet and I find this road trip to be great fun. We have friends and relatives to see along the way. In addition, the drive provides time to reflect on us, our family, and on our nation’s history as well as its present condition. We ate first-rate barbeque in Memphis, Birmingham and Prattville (AL). We saw five baseball games, not nearly enough, in Memphis, Birmingham, Dunedin (FL) and Clearwater. We saw extraordinarily healthy crops, classic infestations, of cudzu in Missouri, Mississippi and Alabama, and once again commented on a number of fireworks stands, writing down the names of the most interesting on 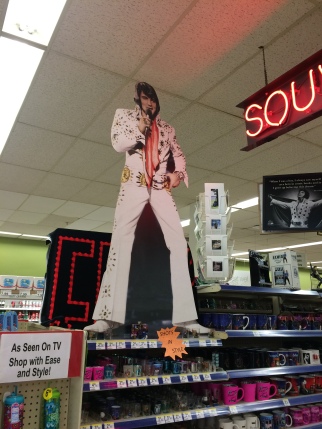 es. We dodged storms in Missouri and Florida, experienced record rains in Tampa, Clearwater Beach and Tarpon Springs, and just missed seeing a waterspout a short distance off the Gulf Coast, right in front of the condominium in which we were staying. Friends and family visited, adding much fun to our five week hiatus. We even visited the Elvis aisle at the downtown Walgreens in Memphis.

So, let’s first get to the fireworks stores. Keep in mind that I live at the epicenter of the Fireworks universe. The Omaha World Herald reported in early July that there were nearly 100 locations to buy fireworks in Omaha. On the drive to and from Clearwater Beach, we counted only about 70 places (June 26-July 1 drive down, July 30-August 1 drive back). Our biggest find was the combination XXX bookstore/strip joint, “Passion Couples Adult Shop” and fireworks stand combination in Missouri. Other notable stands were: “Fireworks Emporium – Home of the Really Good Stuff,” the Wheel of Fortune – win $200 in Free Fireworks at “Liberty Fireworks”, “Pink Gorilla Fireworks”, Pyro Joes Fireworks”, (spend more dough at Pyro Joes), “KA-Boomers Fireworks”, “TNT”, “Crazy Bill’s Fireworks” “Fireworks Red Tag Sale” and “T.J.’s Temple of Boom”. For the most part, there is not that much imagination put into naming fireworks stands. Fifteen of the non-Omaha stands had no name at all, so sad. This was also a big summer for fireworks mishaps with two NFL players managing to get seriously injured and one poor soul killing himself by blowing up some powerful stuff on the top of his head. What was he thinking?

There are always places, signs, sights and sounds that catch our attention everywhere we go. We drove non-interstate roadways even more this year with the hope that we would experience “something

different” and we were not disappointed. Of course, there are cities/towns with unusual names: Amazonia, Shelbina, Excello, Koshkonang, Imbodem, Licking, Cabool, and Hoxie. There was the first flooded rice field we saw just south of Black Rock Arkansas, and crossing the 38th parallel and seeing the Korean War memorialized. Traveling past Route 66 outside of Joplin was noteworthy this year given my current age.

In Memphis, we saw an incredibly interesting photograph of Elvis and B.B. King taken in 1957, two guys just starting out on what would turn out to be incredible roads to stardom, yet one dead by age 42. We drove past Tupelo, birthplace of Elvis, across the Tallahatchie River (think Bobby Gentry), and past the slagheaps outside Birmingham. We saw confederate flags, not too many, including one etched on the side of some guys shaven head – we saw that one at Busch Gardens in Tampa. We saw two guys in separate pick-up trucks, one with a white flag (white supremacy) and the other with a confederate flag driving up and down the main street, Mandalay Avenue, in Clearwater Beach. What were they telling us? We learned a lot more about Scientology and its impact on the city of Clearwater. We saw an Indian (south Asian) wedding on the sand at Clearwater Beach on a day where the temperature/humidity index hit nearly 120! It was reported that in Florida the number of cases of leprosy has risen over the last year (I did not make this up). We learned about the latest developments at the Clearwater Marine Aquarium (Dolphin Tale). And, we saw a blue dog camper as we were driving down the highway in Alabama. 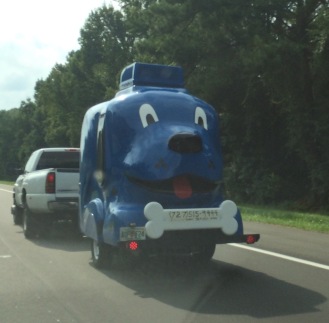 One of the big movie hits of the summer July was Sharknado 3, starring, among others, Mark Cuban, Ann Coulter, and Al Rokker. We watched Sharknado 2 and 3 back to back in the friendly confines of the condo we rented. The plot has not changed since Skarknado 1 and 2 were released, but the sharks are smarter (the characters said so). The end of the movie; well, it never really ends, sets us up well for Sharknado 4, scheduled for the SciFi Channel July 2016. Moreover, several other sea plus genre movies have also been released by the makers of the Sharknado series and can be found on the SciFi channel: Whalewolf, Sharktopus, Lavalantula, Dinoshark, Dinocroc, Piranhaconda, Arachnoquake, Frankenfish and Mansquito. These delights should be watched with friends and in the company of adult beverages. Also, watch out, sometimes there is a Saturday movie fest on Sci Fi where several of these movies are shown back-to-back-to-back.

Back to history and going forward. As most of you know, I lived in Memphis for six years, 1978 to 1984. I moved to Memphis in July 1978 during a firemen’s strike, and over the duration of the strike, just a few days, many of the buildings damaged as a result of the April 1968 riot were completely destroyed. There was not much left of Beale Street and the Lorain Motel was left somewhat isolated with little indication that ten years earlier, Martin Luther King, Jr. had been senselessly murdered on the balcony outside a second floor room. Today, the Lorain is a first-class civil rights museum, and we saw it for the first time (for us) in late June. The historians and architects utilized the old motel quite well, and the stories of racial discrimination, violence and hope told within are moving. I recommend that all of you reading this post (I know, there are not many of you) should visit. The boarding house across the way where James Earl Ray fired the fatal bullet is now part of the exhibit. Visitors can stand and look out the bathroom window of Ray’s room and imagine how it was as he rested the rifle and began to take aim. The main focus of the museum is not, however, on Martin Luther King, Jr. and James Earl Ray. The theme of the museum is on the historic struggle for civil rights for African Americans, with a particular focus on the 1950s and 1960s. The citizens of Memphis, just like those of Birmingham, have taken advantage of a location to better tell a series of very important stories. In fact two days later we were in the Civil Rights Institute in Birmingham, again touring that wonderful facility. I have described the Institute in a previous blog, and will not repeat that story here. It is important to note that seeing both places just days apart had a profound effect on me.

We finished our tours of significant civil rights locations with a visit to Selma. I was still living in a s

uburb of Cleveland on Bloody Sunday in 1965. It was two days after my 16th birthday. I can remember the photos of the marchers trying to cross Edmund Pettus Bridge and the violence that ensued. The 600 marchers had started only six blocks earlier and they were crossing the bridge as part of their trek to Montgomery. State and local law enforcement officials used billy clubs and tear gas to drive the group back across the bridge, back to Selma. With the help of a ruling from Federal District Judge, Frank M. Johnson, Jr., that the marchers had the right to petition their government, Martin Luther King, Jr., Hosea Williams, John Lewis, and others subsequently let the march to Montgomery. The group of 600 marchers grew to 25,000 when they reached their destination 18 days later. We have come very far, but we have a long way to go.