We went to Memphis the last week of 2017. The University of Memphis was playing in the Liberty Bowl for the first time in the 59-year history of this bowl game (Fact: Paul “Bear” Bryant coached his last game in the 1982 Liberty Bowl versus the University of Illinois. He passed away a short time later). We wanted to see The University of Memphis, formerly Memphis State University, play. While they lost 21-20 to Iowa State (the officials were superb), we had a fine time. However, it was a “Memphis Cold” day in the stands, 32 degrees when the game ended, and damp. It’s the kind of cold that runs all the way through you, and more than once. We were happy that it was not raining. The coldest I have ever felt was in Memphis at 33 degrees and raining/snowing – worse than Omaha at minus 15 degrees.

We have been to many sporting events over the years and have seen the full range of pre-game entertainment. Bands march, all kinds of folks are honored, people jump out of aircraft and land in the middle of the field, mascots come out or are carried out, and loud jets, one or more, engage in fly-bys that are very loud and impressive. I can now report another first, for me. It was a pre-game FedEx flyover (big honkin’ jet), moving close to the stadium, pitching its wings as if to say, “hi to you fools sitting in that cold stadium”. And, you guessed it, that big honkin’ jet came around a second time. I think I saw Tom Hanks waving to us from one of the windows, but I can’t be sure. Mr. Wilson? Think about this: The AutoZone Liberty Bowl being buzzed by a FedEx jet.

Of course, we made our way to the Rendezvous for ribs and such, twice. On the first visit, we caught up with my friend and collaborator Rick. He gave us an update on things Memphis, in particular how the city succeeded in bringing down (moving) the statues of Nathan Bedford Forrest and Jefferson Davis (more below). We also talked about his latest book project, a new treatise on applied demography. It’s always good to see Rick. The second visit to the Rendezvous occurred after the Liberty Bowl, this time with my brother-in-law, Gary. The wait list to get seated was reasonable, about 45 minutes. Yes, it was a full rack of ribs again, together with beans and the usual spicy slaw. This year marks the 40th anniversary for me regarding the Rendezvous – I ate there the first time in 1978.

Concerning statue removal, the city council as well as the mayor of Memphis had a clever way of proceeding. They knew that the Tennessee Historical Society would never (well, not anytime soon) allow for the removal of the two statues. They already renamed both parks in 2013. Forrest Park became Health Sciences Park (it is adjacent to the University of Tennessee Health Sciences Campus) and Confederate Park, home of Jefferson Davis, was re-named Fourth Bluff Park. On December 20, 2017, the City of Memphis (mayor and city council) sold both parks to a private organization, Memphis Greenspace Inc., for $1,000 each. Soon after the sale, cranes went into action and very quickly the statues were off to an undisclosed location. It turns out that the historical society only has a say with respect to statues and such when said statue is located on land owned by a city, county, state… Once the parks were no longer public land, the new owners could do whatever they wanted with the statues. And, they did. (Note: we have not heard the last here.)

One more statue item for consideration. The statues are seen by white southerner as part of the culture of their region, commemorating the brave men who stood up for states’ rights. But, the statues were not erected right after the Civil War. The Nathan Bedford Forrest statue was erected in Forrest Park in 1905, at a time of racial unrest in Memphis, and 50 years after the end of the war. The Jefferson Davis statue was erected in Confederate Park in 1964, just as the full force of civil rights/voter rights legislation was becoming the law of the land. The reader is invited to draw their own conclusions about the meaning of the statues.

One final item. We stayed in a hotel near the Memphis International Airport, just a short distance from Graceland. From time-to-time, we like to drive past Graceland to observe the new improvements and changes to the neighborhood. Yes, the Lisa Marie is still an attraction and for a small price you can visit. We had also read about a new hotel right next door to the King. Holy moly, it is large! The Guest House at Graceland is a luxury hotel with 430 spacious rooms plus 20 specialty suites. It fits right into the Graceland experience. 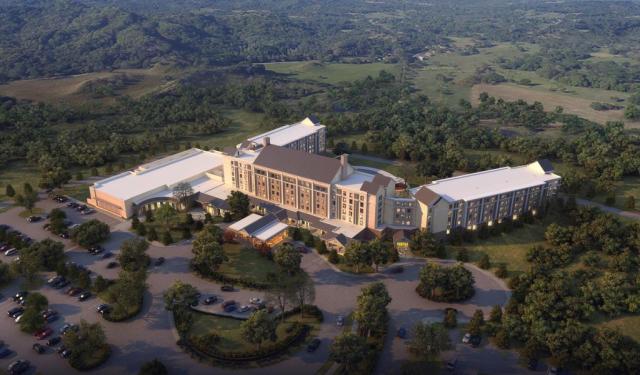