I was in Las Vegas in early February at the AACSB – International deans conference. After boarding the direct flight home to Omaha, the pilot emerged from the cockpit to tell us that our departure would be delayed for a few minutes because we were taking on an extra 3,000 pounds of fuel. Who came up with the term cockpit? The first known reference comes from the brutal sport of cockfighting and refers to the pit in which the fights occurred. By the end of the 16th Century, the term was being used to describe sunken pits or cramped, confined spaces. British naval vessels began referring to a compartment below decks around 1700 as such for junior officer quarters and for treating the wounded during battle. The word was first applied to aircraft around 1914 by pilots during WW1 and then again to racing automobiles by about 1935. I will now return to the story.

When the pilot emerges from his secure place, walks several feet down the isle (to row 2, I was sitting in row 5) and starts talking about fuel, we, the passengers, pay attention. The story went that the snow in Omaha was accumulating (it does that), and when we proceeded east and got close to Eppley Airfield, the runway would need to be cleared (yes, we are all listening intently) and that might take some time. He did not want us to be diverted to Kansas City or Minneapolis. So, we are gassing up in order to fly around Omaha, just in case, as the snow removal took place. (Anyone want to get off and reschedule for tomorrow?) You will be happy to know, although I guess that it is possible that you don’t care, that our ride home was smooth. We did not find ourselves in a holding pattern above Omaha, and when we arrived in Omaha around 1 am, there was not much snow falling, and the runways and taxiways were clear.

Las Vegas is a strange place. It functions along several lines. The hotels and conference centers serve as hosts to a full range of association and company meetings. At the same time, it is a destination for those who wish to gamble and see shows. Sports have become big in Las Vegas, starting with UNLV’s basketball teams of the 1980s and 1990s. With a new NHL franchise (tremendous early success) and the NFL Raiders coming soon, Las Vegas is becoming a sports destination mecca. Its past connections to the Mob are being forgotten, although if you’re nostalgic, or just plain interested, you can go to the Mob Museum. 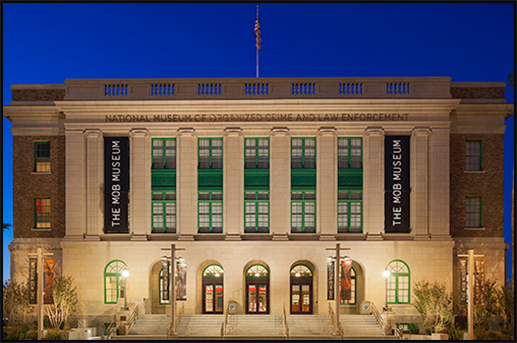 Las Vegas has a playland-like feel to it, but for adults only. The strip, Las Vegas Boulevard, is filled with hotels, restaurants, a mini-Eiffel Tower, a pyramid, and a scaled down version of New York City buildings (e.g. the Empire State and the Chrysler buildings). I stayed at Caesar’s Palace a 300,000 square feet monstrosity that houses a bit of everything. Caesar’s Place opened in 1966, and 90 percent of the resort’s rooms have been renovated (wow, can you imagine staying in a 1966 room?). It’s a great place to go see Elton John perform (sit in the first five rows because you get to go up on stage at the end of the concert), or to play Blackjack, or to shoot craps—there is another two word combination that has no intuitive meaning). So, here we go. Craps is based off a British dice game called Hazard. The term ‘craps’ comes from the roll in dice we now call ‘snake eyes.’ However, in Hazard it was referred to as ‘crabs.’ Over time, ‘crabs’ turned into ‘craps’, and it caught on with the popularity of the game. Try asking where you can go shoot some crabs. I bet that they show you the door. 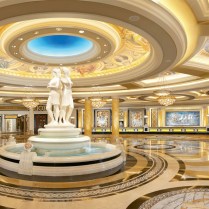 You are never far away from a slot machine in Las Vegas. Some are big; some are not. The incessant sound of the Wheel of Fortune slot machines is enough to drive a person crazy, unless, of course, you have just won a jackpot. Dolly Parton’s 9 to 5 slot machines has Dolly blaring out some kind of song. I bet her momma would be proud. My favorite slot has a Sharknado theme. While many who play the slots appear to be mesmerized by the lights, sounds and action, the thought of playing the slots for more than two minutes, let alone hours on end, is not very appealing, to me. There’s a lot more to do. 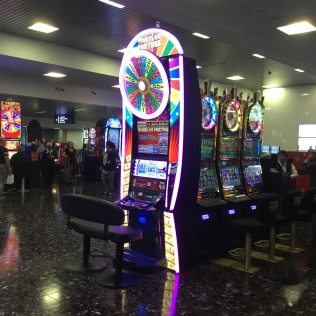 The airport in Las Vegas is funky. It’s an old design, complete with frayed and stained carpet, lots of places to drink, sad looking folks, and slot machines everywhere, it seems. I was surprised when I entered one of the restrooms that I did not find the Plants versus Zombies slot machine (yes, there is one of these) alongside the sink. The playlist over the loudspeaker is eclectic and old. Dylan was forlorn and singing … “to be stuck inside of Mobile with the Memphis Blues again,” while Rod Steward gave us his best of “Forever Young.” As flights roll up to the gates at Concourse C and passengers deplane, the floor starts to vibrate. Earthquake, no. Too much to drink, no. Airport design, yes. Then Elton John hits us with “Bennie and the Jets.”

There were no Elvis impersonator sightings this time. If Elvis was still alive (I know some think that he is still alive), he would be 83 years of age. Imagine an Elvis impersonator not doing Elvis at 42, but Elvis at 83, sort of borrowing on how Frank Sinatra transformed his look and singing style over 40 years. I’d like to see and hear that. Think of it, “Heartbreak Assisted Living,” (okay, it reads bit ageist, but I am 68 nearly 69 and I know that my time is coming). 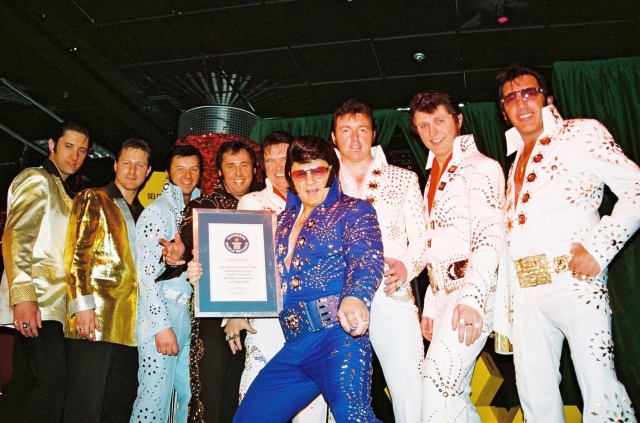