It’s always a pleasure to visit with friends and others connected to our university and college, in Palm Springs and in mid-February. Yes, it’s cold here in February and a respite from the chill is appreciated. Our route to Ontario, California has become pretty well established (we go there every year in February). This year we travelled through Denver on the way out and Las Vegas on the way back. We fly to Ontario for two reasons: 1) there are other friends that we visit with in southern California and 2) it is very expensive to fly roundtrip Omaha to Palm Springs. In addition, the last part of the drive on I-10 east to Palm Springs is very cool. The rocky hills and desert landscape provide quite a contrast from what we are used to seeing in eastern Nebraska. The flights and all were uneventful, and we saw the usual odd passenger dressed in his pajamas. I can also report that the slot machines in the Las Vegas airport are still working.

One of the most interesting facts about Palm Springs is its early (1980s) commitment to the development of wind farms. I have written about wind farms in previous posts. The San Gorgonio Pass is the gateway to the Coachella Valley, and it is a very windy place. Because of the relatively long history of wind farm development in the pass and throughout the valley, you can observe windmills across several generations of technology, including some that have been de-commissioned. The farms are arranged in what appear to be crop rows (we’ve seen a few crop rows here), following the landscape of flatlands, rolling hills and steeper inclines. The land is fairly barren, with the occasional scrub bush and scrawny tree among the boulders and a lot of sand. The view is made even more interesting and impressive by the overlay of transmission lines that both follow the crops and then extend to the cities and towns who use the energy produced to keep their air conditioners working. 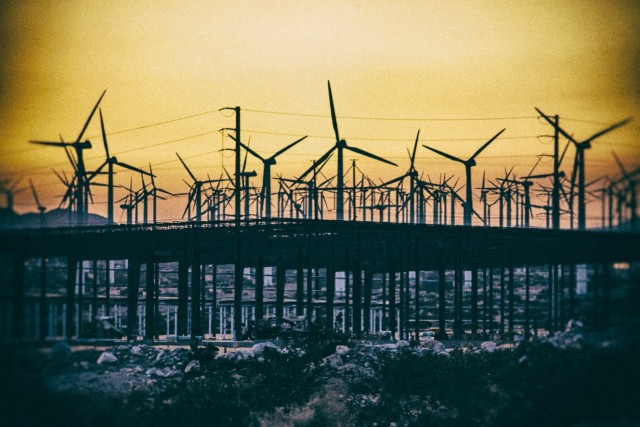 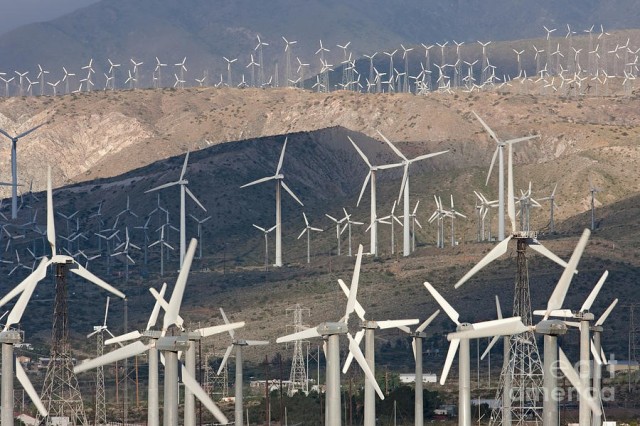 The city of Palm Springs is a really interesting place. It’s small, about 50,000 residents, and relatively young, incorporated in 1938 during some of the worst days of the Great Depression. It became a resort early in the twentieth century and later popular with Hollywood actors during the 1930s, in part because the movie industry was moving west to California and because it was a relatively short drive to and from Los Angeles.

It’s always dry and unbearably hot (the average high temperature in July exceeds 108°) in the summer in Palm Springs, thus the population fluctuates dramatically from summer to winter. Special events and the lure of warmer weather make it a target for short-term winter travelers, adding to the sense that Palm Springs becomes a very different kind of place several times a year. There were more than 1.5 million visitors to the area in 2017.

The architecture is a mix of old (but not really old) and contemporary, reflecting the varied tastes of residents, the history of Palm Springs, and the need to draw tourists to the area. Many homes are landscaped in response to the reality that it is a really dry place, big rocks, little rocks, multi-colored rocks along with cacti and other plant life with minimal water needs. On average, less than five inches of rain is realized annually.