I was back in Texas in September, visiting with my dad and my sister Terry. I am committed to returning to Sanger, Dallas, Denton, and the remainder of the metroplex more often. My dad will be 89 in February, and I want to see him more often. This was a short trip, and with one exception, no time to see friends. Given the short turnaround, I flew directly from Omaha to Dallas Love Field.

In a previous post, I wrote about the fact that in 2012, Big Tex, the 52-foot statue at the Texas State Fairgrounds in Dallas, had caught fire and burned (yes, statues that are not made of stone and steel and such can burst into flames,

especially if there is an electrical short circuit related to the lighting of the statue). Anyway, the fire was caught on video and played many times as fair aficionados gasped, giggled and mourned the passing of an icon. Big Tex had been the official greeter at the Texas State Fair since 1952, and most Texans assumed he was 60 years old, way too young to go out in this way. Research revealed that Big Tex lived somewhere else in a prior life with a different persona…more on that in later installment.

What I did not know prior to this trip is that there was a funeral for Big Tex. No, I am not making all of this up, and I am offering proof via the videos in the following links. In the first video, which is rather long, on-lookers seem sad and amused, and the video is peppered with numerous quips about the fire, his age, and the parts of his anatomy as they become involved in the fire.

The funniest exchanges come from this link from the Russ Martin Show, on 97.1: The Eagle, a Dallas radio station – Big Tex Eulogy.  The audio archive has numerous pictures, but no actual video. The clip begins with the Dallas Fire-Rescue dispatchers and responders, it follows with a hilarious, if irreverent, revival-tent-style funeral service held by Russ Martin and his sidekicks. It ends with some final words from Big Tex himself as his remains are removed in a rather somber ceremony from the Texas State Fair Grounds.  Caution: Don’t watch or listen if you are easily offended.  Some of my favorite quotes include, “Dispatch 6, Big Tex on fire,” “We’ve got a rather tall cowboy with his clothes burned off,” and “Big Tex is gone.”

So, the original Big Tex is gone. Don’t feel bad though. There is a new Big Tex at the fairgrounds, one made of non-combustible material. He’s taller, 55 feet, and weighs more.

As I said at the beginning, on this trip I flew to Dallas. 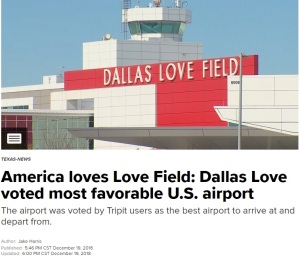 The construction that has modernized Love Field is complete, and the work has left behind a very, very nice airport; a sentiment shared by many. I’m not writing this just because there is a Whataburger in the main atrium. There are other food options, and the use of information boards at each gate is the best that I have seen. The individual gate boards include gate number, flight destination, flight number, time to boarding/time of departure, and the destination of where the flight continues to. The boards also contain information on the next flight departing from the specific date-destination, flight number, and time of departure. The font is large and colorful, making it easy to spot. Keep in mind that Love Field has only 20 gates—it’s legislated that way—making the walk from one end to the other short, only seven minutes on the day I timed it.

I have also written before about the statue of the Texas Ranger (not related to Big Tex) that can be seen as you first enter the airport.

I first saw the ranger in 1965, the first time I flew out of Love Field. In the old days, when there was no TSA or a conga line waiting to get through security, the ranger stood tall in the atrium in stark contrast to the colorful tile map of the world that lay at his feet. Folks would gather up around him and take his picture, with or without humans in the photo. I was impressed, but given that I was 16 years old and didn’t have ‘a lick of good sense’, that’s not much of an endorsement. Well, you can imagine the shock I felt on this visit when I found that the ranger had been moved.

He now greets passengers at the bottom of the escalator/staircase after they arrive from another city. He is now not located in the main atrium, and when you see him after walking into the airport you get an ass-end view. So sad, so sad.

I did a bit of driving around in Denton during my travel from Dallas to Sanger. In particular, I drove by almost all of the places I lived in while residing in Denton, the ones that haven’t burned or been torn down. Those places look so different to me now. It’s been 54 years since we first moved to Denton and 44 years since I last lived in Denton. The drive-bys, plus pictures, also got me thinking about the number of places – – houses, apartments, and rooming houses – – I have lived in over my lifetime. It turns out that I have lived in 41 separate residences across 11 states, including three countries other than the U.S. 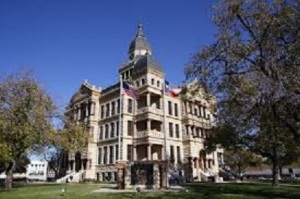 That’s a lot of bad mattresses, noisy neighbors, and weird stuff. It also represents many good friends and a lot of exciting experiences. I will leave you with one last photo, The Denton County Courthouse. It’s a dandy, a truly iconic structure.