It’s always a bit sad to realize that the party is over. The time has come to pack up and go home. Seeing the gulf in the rearview mirror can lead to post-vacation funk if funk counter measures are not taken. I sucked in my last views of the bay driving east on the Courtney Campbell Causeway, and found myself thinking about our next trip, in December, to these parts as we swung around downtown Tampa at Ybor City heading from the 275 to the 75—and Ocala, Gainesville, Lake City and other parts north. The drive on the concrete slab is pretty boring. But, we had a plan and that was to avoid interstate driving when reasonable, select a route that was new to us, and engage in some espionage work. 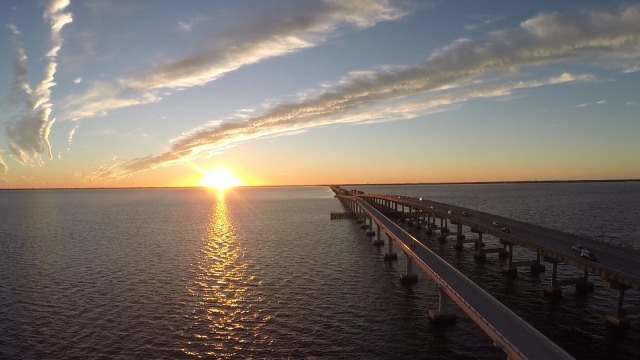 As we drove north on the 75 through Florida and Georgia, we continued to see signs for U.S. Highway 41. The 41 is also known as the Tamiami Trail, and yes it runs from Tampa to Miami, long predating Alligator Alley, the 75 between Naples and Ft. Lauderdale. The 41 originates in Copper Harbor Michigan and ends in Miami, or is the other way around? The 41 is the non-interstate alternative to the 75, and offers a much slower way to get to Atlanta and beyond. The 75 is heavily patrolled (lots of drugs) and there were a good number of cars and trucks that had been pulled over as we rolled on by, violations real or perceived not known. FYI: Georgia has 159 counties so if you are driving fast you don’t stay in one for very long. At one point, we crossed three county boundaries in less than five minutes. 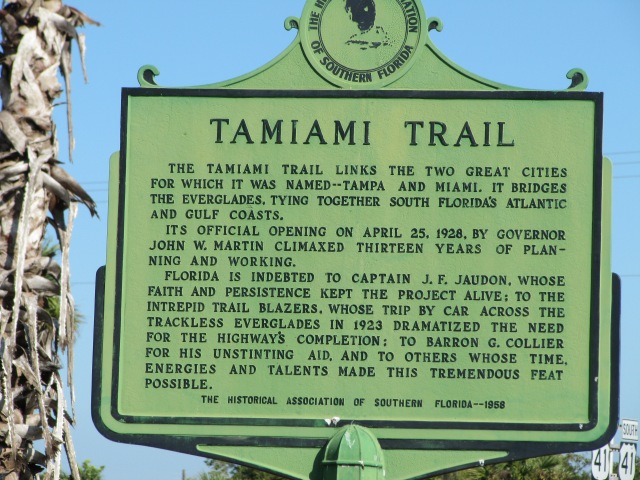 We began to avoid interstate driving in earnest north of Nashville, once the espionage was complete. If I wrote about the nature of the espionage, it would not be espionage, so that’s it. Four lane and two lane alternatives provide a look at America that cannot be seen at 80 miles per hour next to a texting truck driver.

We spent our second evening in Owensboro Kentucky in a high-rise hotel looking out over the Ohio River. Wow! We were on the tenth floor, high enough to observe where the river turns gently from west to northwest. Below, we saw barge traffic moving up and down

river, and a downtown that has been revamped in a most attractive way. Music venues, green spaces, and a bike/walk path border the bluffs of the river, with restaurants, other commercial buildings and a performing arts center mixed in to the landscape. We were chased indoors by threatening rain, but not before we dined at a restaurant with outdoor seating and an excellent view of the river (good music too). The following day we continued west to Hannibal Missouri, four states and three major rivers later.

We learned that it is possible to drive from St. Charles Missouri, just west of St. Louis, to Omaha without travelling on a road that starts with an “I”, and in an acceptable timeframe. The 49, which runs from St. Charles to Hannibal and north is a windi

ng, roller coaster type roadway with some of the best views found on any byway. For several stretches it shadows the Mississippi River, offering broad views of the tree lined waterway, its locks, and the massive delta created by an estimated 100 million years of meandering, and flooding, as well as the much more recently reshaping by the U.S. Army Corps of Engineers. The towns along the river are historic, the best known being Hannibal the hometown of Samuel Clemens. I enjoyed being in 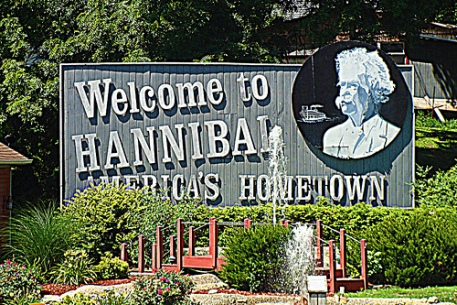 Hannibal where the ideas underlying Huckleberry Finn and other great works originated, but I was also disappointed by its appearance. It has been re-worked and refurbished, somewhat, but it still looks tired. At the same time, the historical significance of Hannibal is such that the run-down condition of many buildings can be overlooked. The two towns just south of Hannibal, Louisiana and Clarksville, are much more attractive, although a lot smaller. 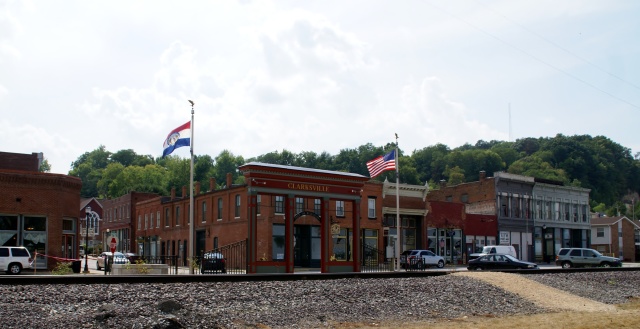 The ride west of Hannibal on the 36 is relaxing and offers rolling views of corn and bean fields along with small towns with character. It is a four lane affair for the most part, but has steeper hills and more turns than the interstate alternatives. We turned off the 36 to head north toward Marysville, MO, and soon found ourselves on a gravel road looking for the home/farm of a friend. We found his place, but decided not to stop unannounced. We saw newly constructed windfarms, and read from the web about the controversy that ensues when a trucked-in three hundred foot plus object that spins around is constructed in the middle of a cornfield. The neighbors are quoted as saying that they do not like the appearance of these objects. Some do not like the sound. You decide. Do you prefer the sound of money to the smell of money?

The last miles took us through Marysville, Plattsmouth, NE, and on home to Omaha. Well, here we are, home in our apartment and already thinking about next year’s travel route. Do we take the incline railway in Chattanooga up to the top of Lookout Mountain? 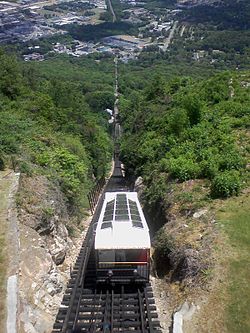