As noted previously, my first trip to Clearwater Beach (CB) occurred in 1989. A colleague at Rollins College in Winter Park Florida (just north of Orlando) suggested that we visit this quiet coastal burg that featured a very nice beach along with one-off excellent restaurants and a slow pace. He was making the not-Disney case. Well, he was right. Moreover, the almost turquoise water was very clear, imagine that, and was warmer and calmer (that is, the water) when compared with the Atlantic Ocean side cities and towns such as Daytona, Ft. Lauderdale, and Miami. Today, CB is no longer quiet, but it still has the beach, ocean, and enough mom and pop restaurants to keep drawing us back.

As I noted in the previous blog, our bikes made the CB trip this year. My goal was to ride 80-100 miles each week, but I only averaged about 60, 250 miles in total. Each riding day I (or we) would leave our place relatively early to avoid the worst of the heat, rain and CB traffic which tends to build up, sometimes exponentially, as the day wears on. I rode a part of the Pinellas Trail each day, in total a 47 mile bike and walk path that winds its way primarily from St. Petersburg to Tarpon Springs (and a bit beyond) on an old CSX railroad bed. The trail is 15 feet wide, great for these types of routes, with 10 feet devoted to bicycle traffic and five feet dedicated to walkers.

The ride from our place to the trail is most interesting. It involves traversing the main roundabout in CB, which early in the day is remarkably almost vehicle free. I then heading east along the causeway/bridge combination that connects CB to the city of Clearwater. Fortunately, there is a bike path to cover the distance, although a number of idiots prefer to challenge the 45 mph plus traffic made up of tourists and others who are texting, talking on the phone, screaming at their kids, being blinded by the sun rising in the east, or otherwise being distracted. Staying in the bike lane may be a bit slower, but it minimizes the chances of getting smacked by a car or truck. The last part of the relatively short CB to Clearwater ride involves a nice incline onto the bridge that crosses the bay separating both places. I always slow down or stop at the apex of the bridge in order to look out on the glistening water, boat traffic, and the distinct water-influenced architecture of the condos, apartments, single-family homes and businesses that occupy the shoreline. At low tide, many sandbars appear, and sometimes these temporary land masses serve as gathering places for boaters who want to meet up with other boaters. The ride downhill into Clearwater is pretty fast, but a nice relief from the 90 second grind that it takes to pedal up to the top. 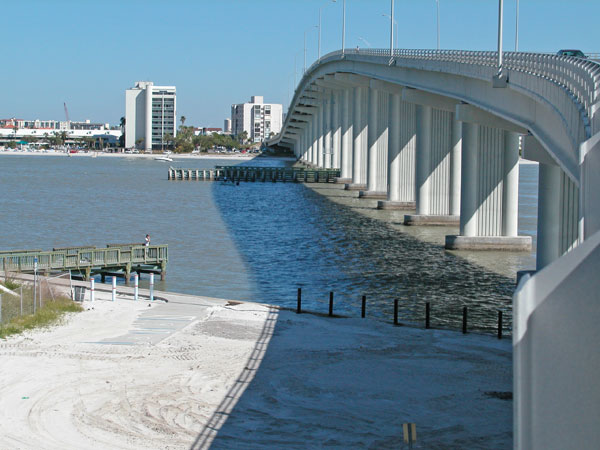 About three miles from our place, I intersect Pinellas Trail, and a decision must be made: ride north or south. Most often in July, I rode north toward Tarpon Springs, with its sponge docks, excellent Greek cuisine, and neighborhoods that twist and bend along the many waterways that make up this most attractive coastal town. The ride north involves skirting the east side of scientology-central, not to too far from the Flag Building, the epicenter for

Thetans who come from near and far to take courses, be audited (not in the IRS sense), and otherwise get turned up and advance in the hierarchy of their mysterious organizational structure. Most mornings, I pass Sea Org members (Scientologists) walking along briskly. I always, yes always, say hello and they always respond in a very pleasant fashion. They are very easy to spot, with their dark blue slacks and vest which overlays a white shirt with tie. Even on the hottest days they are dressed this way and for some time I thought that whenever they got to wherever they were going they would be drenched in sweat. Not to worry, however. I learned, yes you can look it up, that Thetans, Scientologists, do not sweat. Perhaps they have a different body cooling system?

The ride north continues, passing by the police station, past the coolest post office in 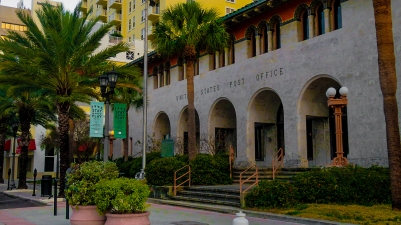 Florida (see picture), and up through the towns of Dunedin, Palm Harbor, Ozuna and Tarpon Springs. It is a flat trail for the most part, deviating only as the old CSX route changes directions, rising to a bridge that crosses US Highway 19A. If you get hot, and you will get hot, and need water, fruit, a light breakfast, or a sports drink, there are options at the 7 mile mark (for me, from our condo), especially at the old railroad station (converted boxcar) in Dunedin. You can also check out the Chick-a-Boom Room for an excellent breakfast. The trail is also covered by shade for relatively long stretches, offering a break from the rather intense summer Florida sun. The path provides views of the water: small lakes, the bay, mangrove swamps, and narrow canals. You will also come across

commercial areas and residential neighborhoods. On Saturdays and Sunday mornings, the smell of bacon can be detected in one part of a Dunedin neighborhood—mmm (where is that house?) The main downside of the trail is that early in the ride, Clearwater through Dunedin, the path intersects numerous city streets. The intersections are well marked, and automobile and truck traffic most often must stop, but for safety reasons one really has to slow down. Stop-and-start biking is not my favorite way to ride, but it is also the case that the car and truck drivers are most polite, often stopping at an intersection even before you arrive.

July is part of the rainy season on the west coast of Florida, and while it is unusual to have all-day showers, most often it is raining hard somewhere in the neighborhood, especially late in the day. Frequently, sprinkles turn into gully washers (aka frog stranglers) pretty quickly, sending one and all to seek shelter. Many tourists are goofy and pay little attention to lightning strikes that precede these storms (lightning during the storms as well). I have watched folks from all over the world continue to walk on the beach, swim and hang out at the pool as the bolts from above are followed by very loud thunder. Just before our arrival in Florida, two poor souls in Daytona Beach got zapped while strolling oceanside. In July, two more took a hit not too far from our place, once again ignoring the very obvious signs that the end could be near.

We have incredible viewing posts to watch these storms form and begin to roll in our direction. CB storms can come from the gulf or inland (off the bay) depending on the nature of the weather system, prevailing winds…I am including two of the cloud formations we saw in July. The first looks as if it might be a cover for alien spacecraft. Think of the movie, Independence Day (the first one). The second, taken to the east with the benefit of a setting sun, offers so much of the beauty nature has to offer. 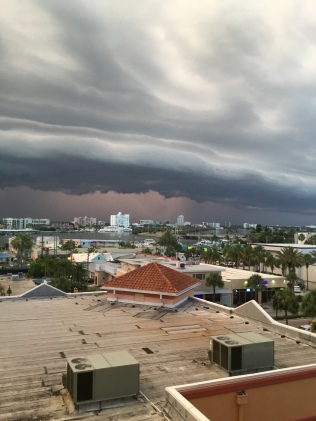 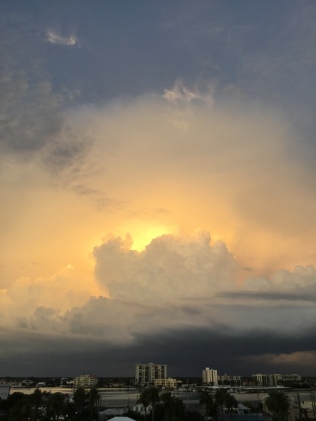 One last note. We only saw four baseball games on this trip, a very low number by our standards. The most interesting game featured the Clearwater Threshers (Phillies) and the Port St. Lucie Mets (Mets), at Bright House Field in Clearwater, a game won by the Threshers in the bottom of the 9th inning. Upon arriving at the ballpark, we learned that it was “Dogs Night Out.” People brought their hounds to sit thought the entire game! And, it was 100 degrees at first pitch, topping out at 101 degrees about 15 minutes later. Needless to say, the dogs were overheating and the owners gathered them up in the main concourse out of the sun. Plenty of water was provided, but the sloshing of the water bowls and inadvertent deposits made a big mess. Many of the dogs did what dogs do in hot weather, sleep. The venue began to look like a doggy sleepover. I could see that the stadium staff did not really like this event. They were the ones who often cleaned up the mess from Fido’s accident.

But, the best was yet to come. When the game ended, dogs and their owners were encouraged to run the bases. From Chihuahua to Great Dane and all points in between, the dogs did run or walk the bases, and more than once. By now the staff looked so sad. Poop on the field is so anti-baseball. The highlight of highlights was when one dog, breed unknown, hiked his leg on third base. Mmm, I’ve never seen that before. It’s true, you can look it up.