It’s July, or almost, and time to head on down to the beach. This is also an opportunity to go to a place where one can sweat from sun up to way past sun down, if one wishes. We packed up the Siena, a great vehicle for hauling a lot of stuff, and even threw two bikes on the back for good measure. I plan to get in between 80 and 100 miles per week, riding only in the early morning hours. Janet will ride some of those miles. We followed much of a route we covered last year (Omaha to Memphis to Birmingham to Columbus (GA)) and then deviated from the roads travelled last summer as we made our last day dash to Clearwater Beach. The picture below is of the view from our condo on the day of our arrival, July 1. 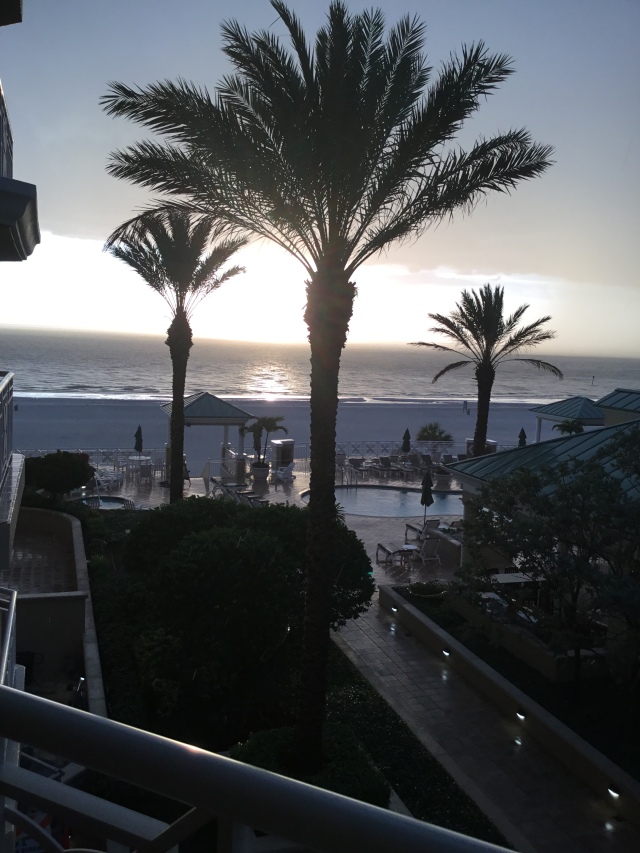 There is a lot to see when covering 1,426.3 road miles in less than three days. There is also a lot to learn about our country in observing the towns, people, topography, crops, and animals…on this lengthy trek. For example, there are a number of Amish communities in Missouri. Road signs encourage cars to share the road with horse drawn carriages, and we saw a few of those rigs. Since there were a number of signs over many miles reminding us of carriages, we began to wonder which roads are the heaviest traveled. Well, now we know. Just follow the horse poop. In some areas, poop density was high, and recent, but over other highway spans, no poop was to be found.

We also observed that there were a number of apple and peach orchards, many, many bean fields, but little acreage in corn, at least early in the trip. Crop composition would change as we rolled down the road. In Arkansas and Tennessee we saw rice and cotton under cultivation, along with many peanut fields in Georgia. The flooded and soon-to-be flooded rice paddies in western Arkansas are most interesting. The unique canal, pump and drainage system allows hundreds of acres at a time to be flooded and drained during the growing season. 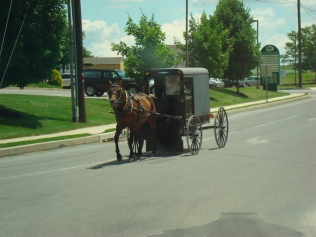 Just a few random observations. The funniest sign we saw on our way towards Clearwater Beach was toward the end of the drive on Highway 19, just north of New Port Richey Florida. It’s for a dentist (MAI) and reads, “Performing more cavity searches than the TSA.” On the more serious side, there were a few confederate flag sightings, the first one in Missouri six miles north of the Arkansas border. We drove on the Jefferson Davis Memorial Highway and saw a very tired sign outside Sylvester, Georgia inviting men (some) to join the Sons of Confederate Veterans.

I have written before about the names of fireworks stands, offering a sampling of the catchiest monikers we have found. Sorry to report, but all of the “good” names have been used, so nothing really different to write about. I do think that many firework stand owners/operators are not reaching deep down in their creative souls in order to produce never-to-forget names. However, from Omaha to Clearwater Beach (and back), we saw a full range of firework stand architecture types. Unfortunately they will never be featured in The Architecture Review.

Fireworks stands come in three architectural categories: tents of various sizes, shapes and colors that are posted up in strip mall parking lots or on small parcels of vacant land; converted structures in small strip malls, including trailers; and permanent free standing year-round buildings that often lie dormant except for the twice-a-year (including New Year’s Eve) sales seasons. The tents offer the most variety in shape, size, and color, and over the 1,400 miles we covered as the Farmers Insurance advertisement reports, “we saw a lot”. Most of the tents were small, 20’ x 40’ or so, and didn’t contain much in the way of fireworks variety. They are often run by a small non-profit organizations, including Boy Scout troups. However, some of the tents, especially those in larger cities, were larger, e.g. 100’ x 50’, offering a lot of variety and most often operated by “professional” purveyors of pyrotechnic opportunities. The tents are frequently square with exterior supports (one or two supports in the middle), with roofs that gradually rise to a peak in the middle. Larger tents resemble those found in travelling circuses, with five or six large support poles spaced out in the middle of the tent and with support on the edge along with the down ropes to add greater stability. In all cases, tents are easy to post up and knock down and can be cheaply rented for relatively short time intervals. The majority of tents we saw were white in color, although red and white stripe, blue and white stripe, and green and white stripe (I think faded blue) color combination were also popular. 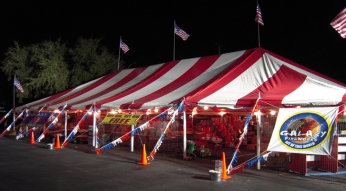 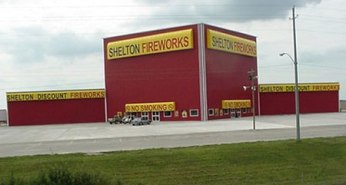 While most opportunities to buy fireworks involve visiting a tent, there are exceptions. We observed a place named, “Big Mama’s Fireworks” in a tired looking all-white (painted) strip mall in Arkansas. There were three converted trailer fireworks stands. I suspect that these trailers began their lives on construction sites and only more recently crossed over to fireworks sales usage. There are not many “built for this purpose” full time fireworks structures, but there are a few. Fireworks sales are a big deal in northwest Missouri and along I-29 several structures can be found. The most impressive is at mile marker 110, and is painted a dull red and it is about 40 feet high (Shelton Fireworks). At the same time we saw a number of year-round firework sales structures in the deep south, especially in Georgia and Tennessee. There, large warehouse-sized buildings with over-the-top signage and catchy phrases (not names) attract buyers from a wide radius. They are able to be open year round because they also function as mini-marts, offering milk and eggs to go along with a full range of bottle rocket and roman candle options. In addition, a number of former service stations have been repurposed for the sale of Black Cat firecrackers, smoke bombs, and sparklers. 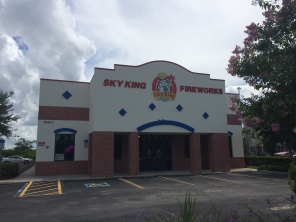