We traveled to the Crane Trust in central Nebraska in the first week of March. We had made reservations well in advance, knowing that this was the start of the major viewing season of the Sandhill Cranes, Whooping cranes, and other birds that have been flying through what is now known as Nebraska for an astounding ten million years. Yes, we were going to have a close view of some of the estimated 500,000 plus birds that travel as much as 5,000 miles to migrate between as far south as Mexico and as far north as Bering Sea and Siberia.

The Crane Trust is located about 150 miles west of Omaha, not far from Grand Island, Nebraska. The trust was created in 1978 as part of a court approved settlement over the construction of the Grayrocks Dam in Wyoming. The state of Nebraska and the Natural Wildlife Federation sued those constructing the dam, using the newly enacted Endangered Species Act as the basis for the suit. Construction of the dam altered water flow on the Platte River, thus putting in danger the migrating birds that stopped to refuel as part of their long journey. The trust was created, including all three parties, and a protected habitat was created. Today, visitors come from all over the world to watch this amazing gathering of bird cranes.

These are big birds. The Sandhill Crane stands 3 to 5 feet tall, with a wingspan of 5 to 6 feet. However, it is a light bird, weighing only 6.5 to 14 pounds. The Whooping Crane is larger, standing 5 feet tall, with a wingspan of 7-8 feet. They weigh between 14 to 17 pounds. There are two other major differences in the birds. First, Whooping Cranes essentially eat-and-run in Nebraska, staying on the Platte River normally for 2 to 3 days. The Sandhill Cranes stay longer, as much as a month or more, using the time to increase their weight 15-20 percent—it’s a long trip.

Our drive to the Crane Trust almost did not happen. It was snowing lightly when we departed from Omaha. The forecast for central Nebraska was far heavier with blowing snow. We talked about the pros and cons of the trip, and decided to go, leaving quite early as we anticipated slower driving. The speed limit is 75 mph, which means much of the traffic is normally at least 80 mph. We did encounter some heavier blowing snow, but our early departure meant we avoided the blizzard conditions that occurred along the route not long after we arrived at the trust. Note: In blizzard conditions, it’s always good not to go 80 mph. On the way home we came across a number of abandoned vehicles in ditches and in the median.

We checked in at the trust and were driven to our cabin. The temperature hovered around 10 degrees Fahrenheit, but the worst of the snow was east of us, thus the visibility was fairly good.  However, larger patches of the Platte River was frozen and few cranes were visible. They were hunkered down to avoid the worst of the weather. Our small group of visitors (several others had cancelled their reservation) was escorted out to one of the viewing blinds, where we were reasonably warm but observed few birds, none very close.

We returned to a central office and restaurant building for dinner. We were given two options for the next morning: go back out to the observation blinds before dawn, and perhaps, observe some cranes, or sleep later and be driven out to check out their relatively new herd of buffalo. And, the temperature in the morning was forecasted to be five below zero. Yes, we chose the latter, knowing that we would go out again (first week in April) to see the cranes. Some folks chose the cranes. I’m not sure that they saw much. 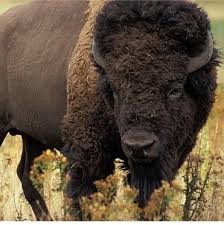 The Crane Trust began assembling their herd of Bison in 2015. Keep in mind that there were once an estimated 30 to 60 million of these noble animals roaming North America from Mexico to Alaska. Also, note that they were systematically slaughtered (it is known as The Great Slaughter), and for the last 150 years there have been very few bison in the wild. In 1889, 130 years ago, there were only an estimated 1,000 animals left alive, 85 of whom roamed free. Today, there are about 30,000 bison who roam freely. They are truly amazing. Imagine a 6.5 foot, 2,000 pound buffalo (that’s as large as they get) charging at 35 mph (top speed). Scary, but elegant.

I suggest that you plan to visit the Crane Trust. Stay long enough to see the birds and bison.