My office phone rang at about 10:30am Friday morning, March 15. My wife, Janet, was calling me to let me know that if I wanted to be sure that I would get home I should leave the office now. I thought about her plea for a few minutes, packed my briefcase, jumped into my Highlander, and headed down the road. I live on the west side of the Elkhorn River and work on the east side. Normally, I leave our house at 6:30 am, and in about 25 minutes, I am in my office. It’s not a short drive, 16.3 miles, just a fast one. On Friday it took me 60 minutes to get home. 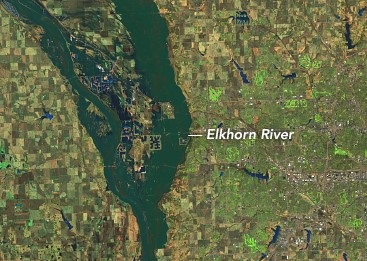 By the time I left the office, two of the possible four routes home were closed. The rapidly rising waters of the Elkhorn River made it hazardous to pass either way, thus the shutdown. I chose my next option, one that put me out just south of my neighborhood. There was a lot of traffic lined up to cross the bridge. I arrived home not sure what to make of all the hubbub. I had an eerie sense as I pulled into our garage.

The flood was upon us quickly. All of you with any connections to the outside world have seen the stories of rescue, property damage, and the loss of life as they played out on the national news. As I write this post a lot of water is running south on the Platte and Elkhorn Rivers to the Missouri and eventually to the Mississippi. In the days to come, these sad stories will repeat themselves again and again, but will originate from St. Joseph, Kansas City, St. Louis, Memphis, Baton Rouge, and New Orleans. Lester Holt, Katie Couric, and Anderson Cooper will tell us again about the acts of bravery, and sacrifice, and also, unfortunately, the loss of everything, including lives. 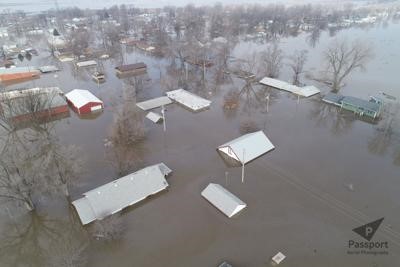 We overuse the term “perfect storm”, but in our case an alignment of three factors brought about this mayhem. First, we have had a very, very cold late winter. Bomb cyclones brought subzero temperatures that lasted for days, and more than one blow was delivered. Second, just a week prior to the flood we had a blizzard, leaving even more snow everywhere. Third, it rained a lot. In Waterloo, Nebraska where I live we had 3 inches of rain in 7 days on top of the snow. The rain and melting snow could not be absorbed by the frozen ground, and water ran downhill to the river. Underlying all of this is the significant change in climate our planet is experiencing.

Flood stage on the Elkhorn River at Waterloo is 14 feet. On Saturday, March 16, the river crested at Waterloo at 24.63 feet. The extra 10 plus feet of water went everywhere. Homes, ranches, commercial buildings, humans, animals, highways, bridges, and cropland were not spared. I live on high ground and our home did not take any water. It was too close though, and when the river crested (I was not certain it had crested) I began to wonder what it would be like if the raging river water began to fill our lake and our home. Earlier on Saturday, we had seen a lake just one mile west of us begin to fill with Platte River water, the result of several levee failures. As the water levels rose and our neighborhood began to look like an island, I also wondered how we could be rescued in a short period of time if the water rose even more quickly. There are a lot of people who live in our immediate vicinity. It would take an armada of boats to get all of us out. There were not enough helicopters to do the job.

During situations such as this one, damage and loss of life happens involuntarily. That is, people, animals, homes and businesses do not sign up to be in the path of a flood. However, there are always exceptions to this generalization. As the flood waters were rising and even after the rivers had crested, many around us (we did too) became flood tourists. All of us watched and read the stories regarding this disaster, and many simply had to go and see what was happening. Cars, SUVs, Jeeps, and other vehicles could be seen all around the surrounding area. Most folks were careful and avoided roads that had “too much” water, or the flow was too fast. Some roads had warning signs designed to stop traffic. But, there are always exceptions, you know those idiots who want to live on the edge, see it all, and again try to prove that Darwin was right. Those folks don’t think at all about who else they might put in danger when they drive around the signs into higher water. 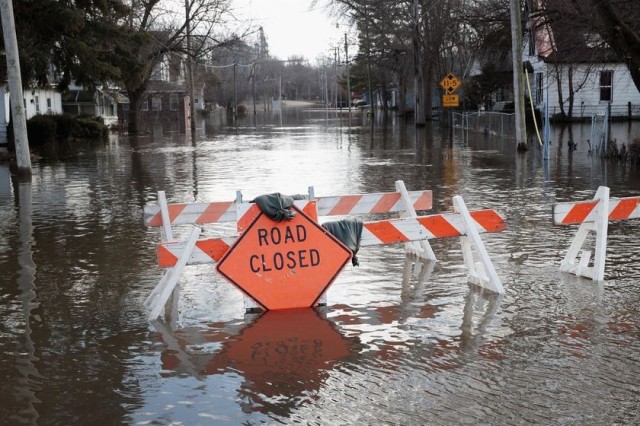 On Saturday at nearly 11 pm, I was catching up with the late news, responding to some messages that had come in, and otherwise dozing—it had been a long day. Black Hawk helicopters had been engaged in rescues throughout the day, but had shut down due to darkness, or so I thought. Then, I heard those very distinct rotors, and knew that they were back. As I looked out our back window, I could see a helicopter hovering. It turns out that some genius and a passenger had decided to do a bit of exploring, in the dark. They thought the signs that the road was closed did not apply to them. They drove in water at least three feet deep, and their circumstances became worse when they turned onto another road that had been washed out. That was it. They were stuck in fast water. A rescue boat was called out first, but it sank. So, two Black Hawk helicopters were finally needed to rescue all. The driver of the pickup truck was in rough shape when rescued. He was suffering from hypothermia. Did I mention that river water in March in our part of the country (it had ice in it) is cold?

This story is part of my travel blog because it includes a trip that I did not take. I was scheduled to leave for Fort Myers on Sunday, March 17. My only option to get back to the east side of the river was private helicopter. I chose not to spend $1,600 to take that ride.