Normally, I do not write about short trips. I have never posted about travel that covered only 5 miles (a 15 minute drive). This is my exception. I promise not to do this again.

I was 70 years old on March 5, 2019, and I can no longer delay receiving social security income benefits in a way that is advantageous to me. Many of you know that for each year one delays applying for social security income beyond age 65, an additional eight percent is added to the monthly check. So, by delaying five years, age 65 to 70, a substantial increase is gained. That’s what I have done. However, the top age for delay is 70. So it’s time for me to collect. My decision to wait is based on my belief that I have hit the genetic Powerball and can expect to live into my 90s. My people live a long time.

Most of those filing to receive checks from the SSA can do so on-line. I cannot. For the last 18 months, three different persons have tried to file for my benefits. How rude. Perhaps they thought I was dead. I try hard not to look dead. At the end of the last attempt to collect my benefits, the SSA and I agreed that I would only be able to apply for benefits in-person, given that the three fraudulent attempts were made on-line. So, the only way for me to begin receiving checks was to show up in the Omaha SSA Office, with identification in hand. 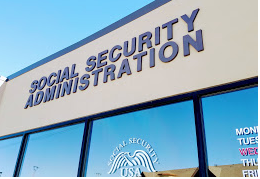 I arrived at the SSA office early, signed in, and got my waiting list number, even though I had a scheduled appointment, and sat down. My appointment at 2:30 pm was with a guy named Brian. I sat down in a black plastic chair. I knew that the chair was uncomfortable because I had been to the Omaha SSA office before. Settling into the chair confirmed that my memory was not faulty. I imagined sitting in the black plastic chair in the summer, my butt sweating, and wishing that my number would be called soon. In the winter, you don’t sweat as much, but the chair still brings no joy. There were very few others waiting in the reception area. I thought the place would be jammed up with people given the date, January 28.  Perhaps it was the very cold weather that kept others home. Perhaps it is the chairs.

I had been in my seat for less than five minutes when I was called early to station 14. Detaching my hiney from that black plastic chair could not have come soon enough. I stood up, collected my file folder, and strolled back to station 14. I sat down in a different kind of uncomfortable chair. I don’t remember the color.

Brian greeted me with a smile and asked me why I was there. He was seated behind protective glass. There was a small opening at the bottom of the glass for the purpose of exchanging documents. I guess he needed to be protected from those of us who might want our money right now, and insisted on it, or were not happy with the answers he gave to our questions. I told Brian that it was time for me to begin collecting my income checks. The period of delay was coming to a close because of my impending 70th birthday. Moreover, I could not go on-line to file for benefits given my record of having other people try to get my money. Brian had my file in hand. He already knew most of what I told him.

He asked me for identification. I was ready. I had my entire file of SSA letters (the ones that told me of the fraud attempts), along with my birth certificate, social security card, and passport. Just a short distance away in my wallet was my driver’s license, credit cards, AAA card, Medicare card… I slid him my passport, and he gave it a look. I told him that I had other identification, but he responded that the passport was good enough. I was disappointed. I expected to be asked for more. I wanted him to ask for more. I really wanted to show him my birth certificate proving that I was born in the Bronx.

He began his questioning with a warning about the penalties associated with untruthful answers. I told him that I would be truthful, wondering how many politicians filed in person. Then we began with the substantive queries. For the next six to seven minutes, he asked me if I was still working, if I was married, what was my wife’s full name, when was she born, did I have children living in my home, and did I have a dog (not that one).This was pretty boring stuff. Nothing about fraud, criminal records, or conspiracies was broached. I was disappointed again. I wanted to earn my money. I wanted him to ask me questions that would make me think. Then it was over. I expected to be there a long time, but we were done in about 15 minutes. It seemed like 15 seconds. I was told that I would receive my first direct deposit payment the second Wednesday in April. Thank you Brian. You didn’t need a glass shield to protect yourself from me.

The ride back to my office took 15 minutes. However, my mind was in a different place. Filing for SSA benefits is a surreal experience. It means something bad has happened or that you have arrived at an age threshold. The experience makes you think deep thoughts. I started thinking about age, old age. How old is old? Is it 60, 65, or 70? Is it when for the first time you find yourself in the grocery store searching for a bottle of Mad Dog 20 20 and a case of Boost at the same time? Or, is it when you remember the Boost and forget the Mad Dog 20 20? Is it when you don’t work anymore because you can’t work anymore? Is it when the list of things you can’t eat is longer than the list of stuff you will eat? Does it start the day you stop eating Twinkies? Is it when you can no longer ride a bike safely? Or, is it when you sign up for social security income benefits?