We were off again in early March for a series of visits with friends and family members. We flew from Omaha to Ft. Lauderdale via Chicago, and then began a road trip that took us to Boynton Beach, Winter Park, Gainesville, Jacksonville, Statesboro Georgia, Tampa, Hollandale Beach, West Palm Beach, and back to Tampa. We flew home from Tampa via Chicago. Little did we know when we planned this trip that it might be the last one for a while. We have already postponed our scheduled trip to Mexico (third week in March), and our travel to Ireland, Northern Ireland, France, and Belgium in May and June is in question—all the result of COVID-19.

More than any other trip I have ever taken, this one was shaped by an external factor, the spread of COVID-19. While there were frequent updates and breaking news on COVID-19 when we left Omaha on March 3, by the time we returned early on March 12 it was the only story.

Moreover, later in the trip any communication with people in Omaha had a virus overlay; for example, the absence of toilet paper at Costco. Sidebar: what is it about Costco toilet paper? Is it special? Toilet paper can be found at other stores in Omaha, yet people seem to be willing to stand in line to get into Costco and not find toilet paper. In fact, the toilet paper section of Costco has been repurposed and is now the bottled water section. Who needs a six-month supply of bottled water?

Anyway, our trip was excellent. In two instances we saw people we had not been around for 25 years. Yet, the strength of those relationships is such that we were able to talk and laugh as if we had seen those people within the last year. Revisiting places reminded us of previous experiences.

On our drive to Gainesville from Winter Park, we traveled through Titusville (we didn’t take a direct route),

stopping to look out over the water at the Vehicle Assembly Building (VAB) at the Kennedy Space Center. When we lived in Winter Park we were located only about 40 crow fly miles from the space center. We watched several space shuttle launches from our front lawn, always marveling when the ground shaking commenced only a few minutes after liftoff. Night launches were best, although our favorite viewing was in the day time at the space center. I was lucky enough to tour the VAB in 1977. 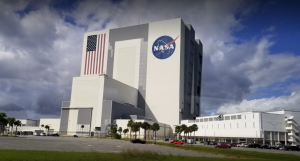 The Apollo program had ended and the space shuttle program had not begun. Tours were available. The VAB is the coolest building I have ever visited. It is the tallest single story building in the world, 526 feet. It’s size allowed it to house a Saturn V rocket for the Apollo program, including the command module and lunar lander. Standing on the floor of the VAB and looking straight up was enough to trigger my imagination regarding all of the space flights that originated there. It was as if July 1969, was being replayed.

The last of our visits involved an Ardovino cousin confab in Hollandale Beach. The epicenter of activities was at my cousin Vinnie’s condo. My cousin, Mary, the best food planner and chef I’ve ever known was at her best. Other cousins from all over and my sister from Dallas joined us for laughter, more serious stories, food, drink, and sidebar trips. My mother, now the matriarch of the group at age 91.5 was there, as well.

On our drives from town to town, we saw all kinds of things that evoked memories or just got us talking. Florida puts a lot of people in jail, and we drove through at least a half dozen places that had good sized prisons. We went through Starke, famous for executions, particularly the one of Ted Bundy with all of the ruckus that took place outside the prison in the hours before the execution. We saw confederate flags, not too many of them, and civil war statues, although almost all of them were erected after 1900, long after the war had ended. We drove non-interstate roadways as much as possible, giving us the chance to view a much wider range of homes, businesses, and waterway. Cannabis College has opened in Orlando, and is not closed due to COVID-19.

When we saw the Mets play the Astros in a spring training game in West Palm Beach, there was no way for us to know that it would be the last week of any major or minor league baseball games for a while. The game was a hoot.

West Palm is home of the Astros, and there was a good number of very loud Astros supporters at the game. At the same time, Mets fans travel in reasonable numbers and they arrived ready for action. Any Astro that played on the 2019 team was greeted by Mets fans with the jeer “cheater, cheater!” as they came to bat or went to the pitching mound. Astros fans attempted to cheer over their Mets counterparts, but were not always successful. It was fun and funny. No punches or objects were thrown, at least none that we saw. The Mets fans knew when to back off. They did not boo or jeer anyone not on the major league team, the guys that are struggling to make the major league roster or move up in the minor league system.

One last set of observations about air travel now. In early February, flights were full, hardly anyone was wearing a mask, and there was the expected upbeat vibe that is connected to air travel. Passengers smiled and laughed at the corny jokes and puns that can be heard on Southwest Airlines flights. Now, mid-March, there seems to be a pall over our airports. Flights are no longer full, so much so that the bounce felt just as an aircraft leaves the runway upon takeoff feels different—less weight, fewer people and their luggage. There are more mask wearers, although some of these are most fashionable. On our flight from Chicago to Ft. Lauderdale I saw a guy with an all-black, sleek-looking mask, very slimming, with a pirate cross covering his mouth. Where can I get one of these?

On a final note, the stories regarding the origination and spread of COVID-19 are in full weird/crazy land. The morning after we returned from Tampa, Janet and I went to our rural Waterloo Nebraska post office to pick up our mail. Janet walked into the very small, built in 1964, light brown brick one story building, and immediately overhead a conversation in progress. The desk clerk was talking to a customer about COVID-19, and both agreed that the biggest problem was the media and its hyping of the spread (I wonder where they heard that one). Then they pivoted smoothly, with no effort, to discuss the origination of COVID-19. For the last two months, there have been stories about unidentified drones in several cities. Well, these folks believe that the drones are spreading COVID-19 and that the Chinese are behind all of it. And, for good measure, COVID-19 is being spread through aircraft contrails. These are the same contrails used to make frogs gay in the world of Alex Jones. Anyway, Janet tried to explain how and why contrails were formed, but they were not buying any of it. Then I learned from a friend that at least one person, and probably more, believes that COVID-19 originates in Corona beer. Oh my.