I was out in California the last week in February as part of a NU Foundation annual event (my last). I also had the chance to meet with some old friends, folks that I will not see as much in the future given that I am no longer dean of our college. This time the travel route was Omaha to Phoenix to LAX

on the way out and Ontario to Las Vegas to Omaha for the ride home. I was traveling with our new dean Michelle Trawick and Sue Kutschkau, the college’s development director.

We began in Los Angeles because our first visit was with one of our alums who lives there—lunch on Wilshire Boulevard. Then we drove from LA to Palm Desert/Desert Palms/Palm Springs for dinner with another alum and his wife. The next two days were filled with more conversations with friends, the NU Foundation event, as well as lunch and a cool side trip in Redlands, California.

It was good to be back in the desert to observe again the stark difference between the dry and barren fringes, the vast majority of the land around Palm Springs, and the green and flowered oasis created by developers in that part of California over the past 100 years. The wind turbines that I have written about before continue to provide much of the area’s electric power, although I noticed an increase in solar arrays sprinkled in and around the wind farms. On my next trip to the area, when I no longer have any university responsibilities, I will go on a guided tour and learn more about how these energy sources effect the communities along the San Gorgonio Pass.

I also arrived in California with a bit of a buzz, no not from cannabis. Earlier in the week I learned that one of my colleagues in our college had scored a $36.5 million ten-year grant from the Department of Homeland Security. The grant will lead to the creation of a Center of Excellence for Terrorism Prevention and Counterterrorism Research. This is the largest grant in the history of our university. It will also significantly change our college’s research path forever. Please read more about Gina Ligon at the link provided, https://www.unomaha.edu/news/2020/02/uno-selected-lead-by-dhs-to-oversee-counterterrorism-terrorism-prevention-research-center.php

Those of you who have flown recently know that the airport vibe has shifted. The daily news updates that report rapidly increasing numbers of confirmed cases of the new coronavirus, COVID-19, and deaths have put all of us in a funk. That funk is on full display in airports throughout the world. While we haven’t had domestic flights cancelled yet, the line at the China Airlines desk at the Ontario airport was non-existent, just two staff persons behind the desk that think their masks will protect them.

Mask wearing on the part of passengers seems to be slowly on the rise. I have several more trips via air over the next few weeks and I will report more on my observations. I did see an interesting masked couple on my way home from California. She was wearing a white, neat fitting, heavy duty mask. He had a gray face cover that looked like something from Star Wars. Perhaps they wore the masks for perceived safety, or to make a fashion statement. I don’t know.

As noted above, we had an unexpected side trip when visiting one of our friends in Redlands. Post lunch, we drove to Kimberly Crest, the former home and grounds of Kimberly-Clark fame.

The house was built in 1897 and purchased by John Kimberly in 1905 as a location alternative to those nasty Wisconsin winters. The Kimberly family lived in the house until 1979, and has since become the property of the city of Redlands. Today, the grounds consist of the mansion and 39 acres of park land adjacent to the home, Prospect Park. The mansion sits on the top of a hill overlooking the San Bernardino Valley. There are beautiful views everywhere. During our visit, the surrounding orange groves

were nearly ready for harvest, adding to the already colorful backdrop. Our friend, Vance Williams, filled us in on much of the history and future of the park. Stop to see it if you are in the area.

The last leg of our trip was Las Vegas to Omaha. Mmm, the Vegas airport on a Friday night. It continues to be old and dark. And, it reeks of desperation and some other smells that I could not identify.

On the flight into Vegas there was a half-dressed, legless (drunk) passenger who was coming there to get married. I’m sure that it’s a match made….. On the way home, it was a quite sad looking crowd. It’s hard to chase the image of the airport away, especially when the first sight upon deplaning in Vegas looks like this. Where is Vanna White? 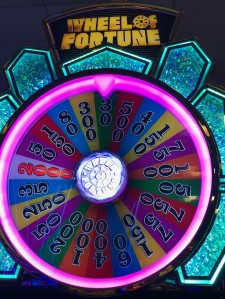