There are seven wonders of the natural world, and finally I have seen one of them. Yet to go: Aurora, Great Barrier Reef, Harbor of Rio de Janeiro, Mount Everest, Paricutin Volcano, and Victoria Falls. Other than the canyon, the only other place on my list of natural place musts is the Aurora. Perhaps I need to reconsider visiting those other sites, although my list of places yet to see also includes many other locations, both natural and manmade. The manmade list is made up of: Parthenon, Easter Island, Taj Mahal, 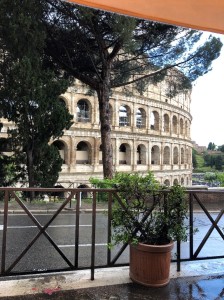 Colosseum, Angkor, Teotihuacan, Petra, Machu Picchu, Great Wall of China, and Pyramids of Giza. I have seen only three of these. The message here is to book more trips.

My travel to Arizona was in conjunction with our foundation’s annual mid-February event in Scottsdale. After being greeted by the state flavor of Arizona, the Saguaro Cactus, we spent time at the Kansas City Royals’ spring training site in Paradise, watched two victories of our UNO baseball team over Northwestern in Glendale,

and visited several friends and alums in the Phoenix area. As in the past, I had a fine time. Certainly, hanging out in warmer weather, -4 degrees F versus 70 degrees F made a big difference.

All of us have seen pictures of the canyon. It’s even better in person. And, it is certainly the largest ‘wonder’ place on the planet, 227 miles long, 18 miles wide at its widest, and more than one-mile deep, 6,093 feet, at its deepest. The south rim access area is a one hour fifteen minute drive west and north of Flagstaff. We avoided the late spring/summer deluge of humans by visiting in mid-February. The temperature was reasonable, high in the low fifties, and clouds/fog did not obscure our vision. Recent studies show that the Grand Canyon may be as much as 70 million years old, although there is another group of scientists who support the “young canyon” theory, six million years old. Either way it’s old. Those folks at the creationist museum and at the Ark Encounter contend that the canyon is a leftover of the big flood; therefore, it is less than 6,000 years old. While that Noah guy sure could build a boat, I am going with the scientists on this one. 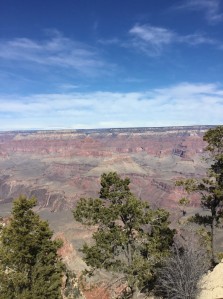 One surprise that came along with getting to the canyon was the drive from Scottsdale to Flagstaff. After a ho-hum beginning on local streets and the 101, it was on to the 17. The ride north is full of curves, ups, downs, and an ascent that starts at less than 1,000 feet above sea level rising to over 7,000 feet (Flagstaff).

At 3,000 feet, the Saguaro Cacti, leave the scene, no longer around to give tourists and residents the one finger salute. The pines begin to take over at around 4,000 feet, and become an even greater part of the landscape as the altitude increases.

The speed of traffic is reasonable on the way up. A crappy surface combined with the twists and turns keep most of the speedy folk in check. I found little evidence of the Highway Patrol, State Police, or any other form of the gendarmes on the way up to Flagstaff. No one to keep the crazy folk in check. On the way back, Flagstaff to Phoenix, it’s Gentlemen (and Women), Start Your Engines; the race is on. Drivers are egged on by signs that periodically report the number of minutes until you reach Phoenix. The response: I can beat that. The start in Flagstaff is fairly normal, 8-10 miles per hour over the speed limit. You have read as I have written about the 80 plus drivers in Texas. Amateurs here. Of course, I joined in on the fun. The first time I looked at my speedometer as it reached 90 mph, and I was still being passed by several cars. From that moment on, I knew we were in for a short, but exciting ride back to Scottsdale. We easily beat the sign-reported number of minutes to Phoenix. I did observe someone stopped by some sort of law enforcement, but it had hardly any effect on me or the other drivers.